Today I received an email update about an Iranian muslim-turned-Christian who is imprisoned for his faith. Farshid Fathi was arrested in December 2010, convicted on March 5, 2012 for “acting against national security through membership of a Christian organization, collection of funds, propaganda against the Islamic Regime by helping spread Christianity in the country,” and sentenced to 6 years imprisonment. Recently he was injured by a guard and denied medical treatment for 3 days. For more information, see the website for The Voice of the Martyrs — http://www.prisoneralert.com/pprofiles/vp_prisoner_221_profile.html

This case is not an isolated incident.

Many sources state that more Christians were martyred in the 20th century than in all previous centuries combined.  Here is a sampling: erlc.com/issues/quick-facts/persecution citing the Int. Journal of Missionary Research; Zenit.org on EWTN Global Catholic Network website dtd 10 May 2002; “Focusing on the Persecuted Church: The Century of Martyrs” on http://www.jwipn.com/pdf/The%20Century%20of%20Martyrs.pdf; ]. 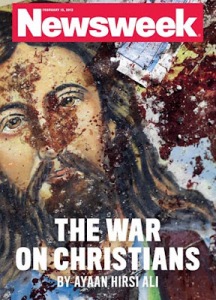 In the 21st century, persecution is increasing even more, to such an extent that the headline for the February 12, 2012 issue of Newsweek magazine was “The War on Christians.”

This trend makes me wonder —

If I was charged in criminal court with being a Christian, would there be enough evidence to convict me?

I would hope so.

But I have to admit that my behavior and attitudes have not always reflected well on my Lord and Savior. . . especially in heavy traffic. Which is the main reason I don’t have a Christian fish bumper sticker.

Some have said that the best evidence of what we value is in our bank statements. Certainly a factor, but many don’t have much to give. See the parable of the Widow’s mite, Mark 12:41-44 and Luke 21:1-4. As Jesus observed, she gave all she had. I haven’t.

What about my time? I think of many faithful old saints who served their whole lives as Sunday School teachers, ushers, deacons, elders, etc. Who visited the sick and widows. Who held garage sales to raise money for Bible camps, missionaries, the needy. Who serve meals to the homeless. Who collect cans for the foodbank and clothes for the “church closet.”  And the list goes on.

I waste too much time watching TV.

So, if I’m arrested, will there be enough evidence? And how will I plead?

Matthew 10:33 (NIV) says “But whoever disowns me before others, I will disown before my Father in heaven.” Those are pretty high stakes, indeed.

Fortunately, if that happens, I won’t be speechless and alone. According to Matthew 10:19 (NLT)  When you are arrested, don’t worry about how to respond or what to say. God will give you the right words at the right time.

What about you? If you are charged today, what evidence is there to convict you of being a Christian?

If that evidence is insufficient, what can you do to change the situation?

One thought on “Enough Evidence?”